Have you been using a thermal screen in your greenhouse? You really should…

We’re big fans of energy efficiency here at DryGair. We’ve noticed that many greenhouse growers have yet to start using screens. This is a simple list to sum up the reasons we consider thermal, shading and blackout screens to be a must-have.

In a greenhouse, energy is a massive expense. Most energy is spent trying to maintain an optimal temperature to make our plants comfortable. This means heating up when it’s cold outside. Not just in cold climates or during the winter, but also through the night. During the summer, hot days and generally in warm regions, cooling is the big energy consumer. Whether you need boilers, heat pumps or HVACs, one thing is certain – your energy bill can climb high.

One thing that can drastically reduce your energy needs is a thermal screen. There is a constant exchange of heat with the outdoors, through the walls and ceiling. By creating an extra barrier you can reduce the heat transfer. This allows you to conserve heat collected during the day, as well as the infrared radiation absorbed by the floor, which is released as heat throughout the night. By utilizing the right screen and further isolating the greenhouse during cold periods, you can reduce the heat loss. But using it wisely is key, as on hot days you may also use it prevent overheating. It really is a big player in the climatization game.

Energy efficiency is by far the greatest advantage of screens, generally paying themselves off in 18-36 months.

Plants and soil constantly emit water. If this water vapor meets a cold surface, the water condenses onto that surface into liquid form. Most times, that surface is your ceiling! Even if you control your relative humidity levels, when it’s cold outside, you’re bound to end up with condensation on your ceiling, pipes and railings, due to the low temperatures outside. This inevitably causes water droplets to form and drip down onto your crops, which may seriously harm them by providing the conditions for the development of many plant diseases. Proper screening can act as a physical barrier, stopping the drops from reaching your crops and completely negating this.

A point often raised against the use of screens, is that they may cause relative humidity to climb much faster. This is due to reducing the size of the grow room. This emphasizes the need for dehumidification, which easily controls relative humidity levels, especially in an insulated environment. Coupled together you can achieve greater energy efficiency while reducing humidity problems. It really is a win-win scenario. 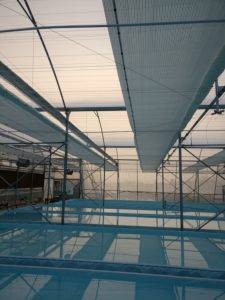 A thermal screen installed under a shade screen

Thermal screens separate the top part of the greenhouse from the central growing space. In addition to creating insulation, this also “shrinks” the greenhouse space. If you control parameters such as relative humidity, for example, using DryGair, you are able to treat a smaller space, giving you more control and use less resources to do so. You can focus on your plants, without needing to treat the plant-less spaces at the top of the greenhouse. In general, working in a smaller space allows for easier, more efficient acclimation.

Being able to control the environment is a greenhouse’s biggest advantage. For some growers, this means lighting during the night. But with greenhouses being more abundant than ever, this can lead to serious light pollution.

Light pollution has many adverse effects. It can harm wildlife, have a negative impact on plants in the area, and be a nuisance to nearby communities. In fact, many communities around the world are already combatting greenhouses lighting the night sky. In some cases, such as in Kingsville, Ontario, local government has been acting to reduce light pollution.

This may be a warning sign. Many growers around the world are gearing up for regulatory changes regarding this issue. The best way to tackle it is by using blackout screens, which can block close to 100% of outgoing light.

Using a blackout screen allows growers to operate using the best lighting regime for their crops, without having to worry about light pollution regulations. Most blackout screens provide much of the same benefits as other screens, with a focus on light exclusion.

Though blackout screens may not be necessary for most crops, they may soon become a necessity in many fields, including cannabis cultivation.

We’ve covered the basics of greenhouse screens. There is a huge variety you can utilize. You may want increased shading or complete blackout options, more air flow or more UV protection. You can double down for extra insulation or combine different types. Screens are a diverse field which can and should compliment your operational needs.