One of the biggest energy expenses, for many greenhouses, is heating.

This rings especially true during cold nights or during the winter.  When the temperature drops, heating becomes critically necessary, often working non-stop. There are many ways to cut back on energy consumption, but one of the simplest ways is to reduce the need for heating, much of which could be cut back with simple heat retention methods and avoiding unnecessary losses to the environment.

The first step in improving greenhouse heat retention is to understand exactly how heat is lost.

There are 2 major avenues for heat to escape: 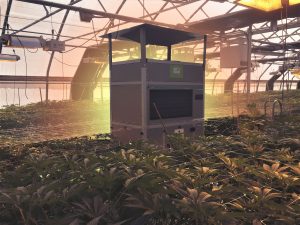 Greenhouse Heat loss is extremely grave during cold nights, or during swift temperatures changes during dusk and dawn.

In a greenhouse setting, heat loss is driven primarily by conduction. The air inside indirectly interacts with the air outdoors, through the greenhouse cover. Any difference in temperature between the two will cause them to try and balance out. The warm air will lose heat, through the cover, to the colder air outside. The temperature difference determines the rate of heat transfer, with larger differences causing greater losses.

There are 2 main parameters affecting the rate of this type of heat transfer. First, is the greenhouse cover material. Certain materials retain heat better than others, these have a lower “heat transfer coefficient”.

The second factor which determines the rate of conductive heat loss, is the surface area. The larger the surface, the greater the heat loss, as more air comes into contact with the greenhouse cover, causing more heat to be transferred.

The second heat loss mechanism is direct air exchange with the outdoors, either through ventilation, or leaks in the greenhouse exterior. This air movement results in a loss of heat and introduction of colder air into the space.

Often times, greenhouses are opened or ventilated to reduce humidity. This is a major heat loss driver associated with commercial cultivation.

Improving a greenhouse’s insulation can drastically reduce the rate of indirect heat transfer between the greenhouse and the outdoors. Insulation comes in many forms, from professional products to DIY solutions.

When looking into insulation there are several important things to consider.

The clearer – the better. In a greenhouse, harnessing sunlight is crucial. Any material that will cut back on incoming sunrays will have a negative affect on the radiation needed.

Maintenance and cleaning also play a big role in retaining efficiency. Insulation solutions should be easily cleaned and fixed, or you run the risk of their efficacy dropping over time.

Foundation insulation, and any type of insulation done below plant level (if crops are grown on benches, for example) are very efficient and lack the negative effect on radiation.

Double layer covers mean just that – two layers instead of one, with a gap containing air in between. The dead air space between the two greatly reduces the conductive heat loss.

Just as with insulation, it is important to make sure the incoming sunlight is either uncompromised or accounted for.

A well-fit thermal screen will create a pocket of air above the growing space, acting as a sort of double layer cover, reducing the indirect heat transfer. Additionally, by effectively reducing the height of the greenhouse, the space becomes smaller, leading to more effective heating. Closing the screen overnight, when sunlight is not a factor, is one of the best methods to ensure the heat retained from throughout the day is saved for the night. Additionally, circulating smaller volumes of air can contribute to uniform RH and temperature levels.

Thermal screens can and should be doubled up on. Two or three screens are much more effective than one and provide the added benefit of being able to utilize less or more coverage, for different time periods. 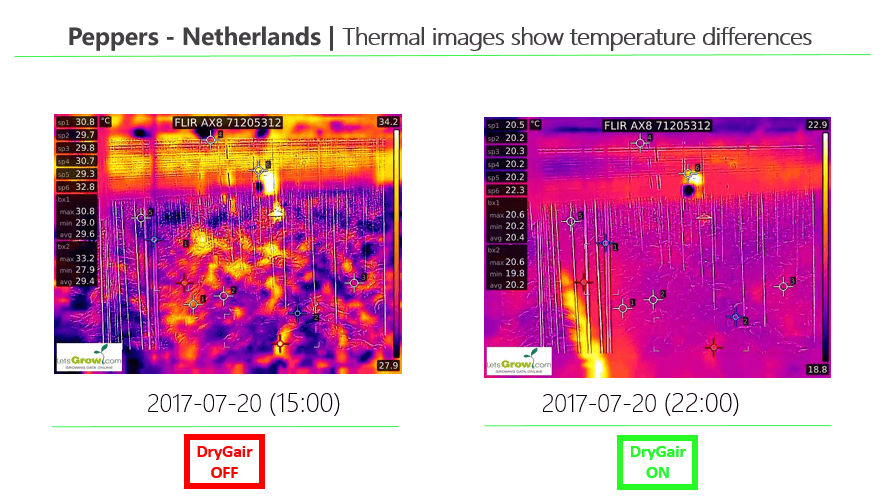 This one may seem obvious, yet is often ignored.

Finding and fixing leaks in the greenhouse cover can have an immense impact on heat loss. Small holes, or loose connection points can normally be found around entryways, corners, or where the cover meets the ground. These, often miniscule gaps, allow air to be directly exchanged with the outdoors, with no control or oversight.

Especially in colder climates, performing a thorough inspection before winter can save a lot of money on heating.

Part of greenhouse maintenance, other than fixing leaks, is keeping a clean, clear exterior.

A murky greenhouse cover will block large amounts of sunlight radiation. Other than reducing the photosynthesis performed by the plants, blocking out sunlight also blocks out heat.

Keeping a clear cover lets more heat in during sunlight hours, heat which can be retained into the night, if all other techniques are appropriately implemented.

Setting up windbreaks outside of the greenhouse limits the amount of wind passing over and around it.

Fast traveling wind surrounding the greenhouse rapidly disseminates the heat transferred through the cover. This results in an intensified rate of indirect heat transfer.

By limiting the wind that comes into contact with the structure, the conductive heat transfer can be effectively limited.

Introducing dedicated dehumidifiers into the greenhouse has become a leading method to reduce heat loss and energy costs.

The traditional form of humidity reduction consists of venting, to let out the humid air, and heating, in an attempt to maintain optimal temperatures. By reducing the humidity from inside the space, without ventilation, the direct air exchange is drastically cut back, and the need to heat in order to compensate for the ventilation is nullified.

As with any piece of machinery, dehumidifiers emit a bit of heat as they operate. If done properly, this heat can be harnessed as well, resulting in a slight boost to heating efforts when needed. 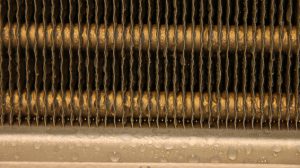 Greenhouse humidity on a dehumidifier coils

Climate uniformity is a big issue in greenhouses. Most grow rooms suffer from microclimates. These are small pockets of air with differing climatic properties. In most cases, these areas tend to be slightly colder and more humid than the rest of the space, resulting in reduced efficiency and increased susceptibility to diseases.

Though this is not a form of heat loss per se, microclimates cause inefficiencies regarding heating. Most growers will combat these conditions by increasing their central heating efforts.

If microclimates were to be eliminated, the objective of bringing the entire greenhouse space to the desired temperature would be much easier, resulting in shorter necessary heating times.

Achieving uniform climate conditions can be done with the help of air circulation, which disseminates these pockets of air. Allowing heating efforts to focus on the entire space, rather than on the most extreme spots found within it.