Hydroponic farming techniques may vary, as we covered in our previous article – How it Works – Introduction to Hydroponics Agriculture Series – Part 1, but the basic underlying principles stay the same. Growing without soil brings with it many advantages, but not without obstacles to cross, and costs to bear. In this article we will cover the advantages, as well as downfalls, of hydroponics, compared to soil-based growing.

Many of the following observations are based on an article published by the International Journal of Environmental Research and Public Health, titled Comparison of Land, Water, and Energy Requirements of Lettuce Grown Using Hydroponic Vs. Conventional Agricultural Methods, written by Barbosa, G.L., Gadelha, F.D.A., Kublik, N., Proctor, A., Reichelm, L., Weissinger, E., Wohleb, G.M., & Halden, R.U. The article is based on research done in Yuma, Arizona which quantitatively compared the two methods in greenhouse lettuce cultivation. 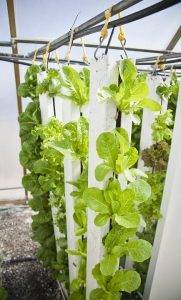 As the global population is steadily growing, land use is quickly becoming a major factor in any manufacturing sector. Hydroponic agriculture holds the key to massive reductions in the amount of land needed for sufficient crop cultivation.

Firstly, hydroponics, being a soil-less growing method, allow crops to grow without the need for an actual plot of earth. Instead, a small piece of land may contain vertical stacks of plants, multiplying the efficiency of said plot.

Additionally, without the need for actual soil, cultivation can be done indoors and in alternative spaces, such as buildings or rooftops.

Even when disregarding these potential alternative growing spaces, the sheer efficiency of nutrient transfer associated with hydroponics can increase yield. In fact, the hydroponic greenhouse in the Arizona experiment provided 11 times as much lettuce, compared to the traditional greenhouse.

Hydroponic agriculture is a technological field; therefore, it relies on energy to provide optimal conditions to the crops. All hydroponic methods face the challenge of providing either water, or oxygen to the plant roots. Though different methods face different challenges, they all come with energy consuming solutions.

When it comes to DWC (deep water culture) setups, the roots are constantly drowned in water. To provide oxygen in this situation, air pumps are necessary. Considering that commercial scale operations may use large reservoirs, the need for air pumps increases, along with the electric bill.

Techniques such as NFT (nutrient film technique), often allow the roots to be partly in the air, providing all their oxygen needs. Additional oxygen is provided in the reservoir by creating a “waterfall” from the pipe system or a simple air pump. In both cases, the bulk of energy consumption associated with this method is the water pumps, running water from the reservoir to the top of the pipe formation, and possibly back to the tank, depending on the design of the system. While air pumps are relatively low on the electricity consumption scale, water pumps require a heftier wattage.

The research done by Barbosa et al. was based in a climate controlled greenhouse. In this setting the electricity consumption was much higher than conventional farming, though most of the increase came from the climate control systems, which could be found in a traditional greenhouse as well. Electricity associated directly with hydroponics only raised the consumption level by a few percent.

Though climate control is present in both hydroponic and conventional greenhouses, it may present more of a challenge, and therefore require more energy, in a hydroponic setting.

The subject of climate is further discussed in Part 3 – Water & Climate Conditions.

Hydroponics are proven to be an efficient growing method, but not all crops share the same sentiment when it comes to growing soil-free.

Crops which tend to grow best in a hydroponic system are typically low demanding, nutrient-wise, and have a relatively shallow root system. This makes leafy greens, such as basil or lettuce, prime contenders. Most commercial hydroponic farms focus on this type of plant.

Crops which should be avoided in such a setting are mainly root crops. Potatoes, carrots and radishes all perform better with soil. It is completely possible to grow these though, as long as the system design provides adequate root space. It may be difficult to provide the right depth for these roots in systems such as NFT, in which the roots grow into pipes, which could easily be blocked by large root systems.

Crops which require large spaces, such as watermelon or corn are simply not economically viable in a hydroponic greenhouse, due to the large spaces needed.

The most important key to a successful grow means, first and foremost, matching the optimal growing technique to each crop. 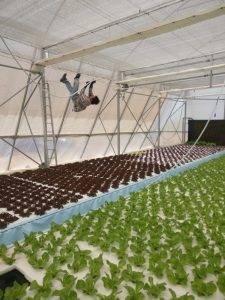 In addition to standard greenhouse equipment, such as screens, heating pipes etc., hydroponic set ups require additional investments in infrastructure. Laying soil on the ground is relatively cheap and simple. But properly setting up hydroponic systems can be more complex and costly.

The most common commercial technique is NFT (nutrient film technique), which requires a large array of pipes. The larger the system, the more pipes needed. It is also necessary to create a reservoir to contain the nutrient-rich water. From the central reservoir, water needs to be piped around, requiring water pumps and additional piping. Costs can be relatively low in a small-scale DIY setup. But when building a commercial, large-scale greenhouse, the amount of infrastructure, and therefore costs, pile up rapidly.

Additional hydroponic-specific costs exist in the form of monitoring equipment. The most basic parameters requiring constant monitoring and adjusting are EC (electric conductivity) and pH (acidity). There are relatively cheap options to manually measure these parameters, but a commercial growing space may want to invest in higher grade, possibly automated equipment, to ensure the constant well-being of the crops.

Last, but definitely not least, is the cost of grow medium. This may seem trivial, but the price of these mediums, though they vary greatly, is far beyond current the price of soil. The difference is very noticeable when scaling up, especially in the initial costs, when the entire operation needs to be stocked.

The removal of soil from the growing space affects the variety of pests encountered. Though this may at times act as an advantage, and at times a disadvantage, it is important to take note and act according to the environment created in your greenhouse. One crucial note to make, is that any problem encountered, will spread much faster in a hydroponic setting. This is due to the density of the crops as well as the removal of the physical buffer which soil provides.

Common pests such as spider mites and aphids remain a nuisance in hydroponics, and should be dealt with using the same tactics. It is important to note that the type of medium used may, or may not, provide suitable grounds for the larval forms of various pests. For example, thrips larvae manage to grow just as well in rockwool, but could not exist without a grow medium. Root aphids, on the other hand, manage to cling on to roots in a setup in which roots are in the open air, without a grow medium.

Though pest problems do remain, they are much less common in a soil-free environment. Additionally, without soil, there are no weeds!

The reduction of pesticides and herbicides provides higher quality crops, and may open the door to going completely organic.

The final parameter to take into consideration in a hydroponic farm is managing the operation after the initial construction. This too, has its benefits and its downsides.

Working in an environment without soil, means a much less physical work regiment. There is no need for whacking or fumigating weeds, no watering and no tilling.

What is necessary in a hydroponic farm is attention. In traditional settings, soil acts as a physical barrier, delaying the reaction to changes. Without soil, the crops immediately feel any change, be it temperature, acidity or pests. The ability to monitor and adjust constantly is the biggest factor in the success or failure of such a greenhouse. As mentioned earlier, problems tend to spread quickly in a hydroponic greenhouse. Whether dealing with a fungus or a cold spell, the effects may be apparent immediately.

In order to successfully run a hydroponic greenhouse, knowledge and experience are the key. Advanced monitoring systems exist and may be extremely helpful. But only an experienced and knowledgeable grower will know how to analyze and react to the data provided. Any mistake can lead to massive yield loss. In hydroponic settings, the stakes are high.

Hydroponic agriculture differs from conventional farming in many aspects. Most of which are more efficient, but some may be considered less so. It is important to take geographic and regulatory conditions into consideration, when planning and operating a hydroponic greenhouse. You should also consider shifts in food supply, land and water availability, and energy sources.

These methods’ cost effectiveness may currently vary. But global trends such as drought, population growth, shifts in energy production and changing urban environments are bound to help cement the position of hydroponics, as well as other tech-based farming methods, in the future.

This is the second of a series on the emergence of hydroponic agriculture and modern, technological farming.