Blight – Lessons for The Future of Pest Management

Phytophthora infestans is a microorganism commonly known for causing late blight, a disease notorious for decimating tomato and potato crops. Infamous for causing widespread famine in nineteenth century Britain, late blight is a frightening humidity disease in greenhouses. In most cases, growers use a variety of fungicides to battle late-blight. The attempt to eradicate this disease costs the global agriculture industry hundreds of millions of dollars annually.

Disturbing news have been coming in from Europe, where three new P. infestans sub-species have been discovered. These three newcomers were found in different parts of the continent. Originating from the Netherlands, the pathogen has already spread to Belgium, France, Germany, Poland, Denmark, Sweden and Norway. These new genotypes have been found to be resistant or insensitive to fluazinam, a common fungicide.

The spread of these new species may already be felt. Last month, a late-blight outbreak had been announced in UK tomato crops. This outbreak was reported as potentially being the discovery of a new strain, as crops were infected much earlier in the season than usual, in much younger plants. This has alarmed the AHDB (UK’s Agriculture and Horticulture Development Board) and prompted SCEPTREplus, the AHDB’s crop protection program, to conduct a trial to identify new potential options to control the disease. 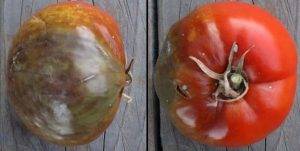 Europe is not alone in this, as late blight look-alikes have also been spotted in tomato and potato crops in North Carolina. The North American crops are infected by Phytophthora nicotianae, an oomycete (fungus-like organism) of the same genus. Though not a new occurrence, growers in the southeast United States have been battling with the disease on a larger scale than usual, due to the season’s relatively high precipitation levels.

The Future of Blight Management

All these instances of blight-causing microorganisms, and all microorganisms in general, have one thing in common: they all need the right conditions to cause disease. In fact, all Phytophthora species discussed in this article share a critical factor for their success- they all require high levels of relative humidity to succeed.

With fungicides continually failing and new species popping up with higher resistance levels, it may be time to consider a different approach. Pests such as P. infestans may never be eradicated, but their outbursts may well be managed, at a lower cost than the current form of battle, using completely organic means.

Gracie Emeny, AHDB Knowledge Exchange Manager: “Conditions to avoid for disease development are a combination of 10-20˚C and high relative humidity. It’s important to prevent the development of standing water and surface wetness, and to remove all infected plant material from the glasshouse.”

Humidity is a fairly new factor taken into consideration in greenhouse climate control, though technology has come a long way in a short period of time, with dehumidifiers now being designed specifically for agricultural uses. 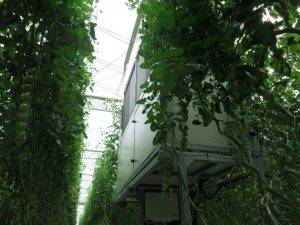 DryGair, an Israeli-German owned company, along with Volcani Center- ARO (Israel’s Agricultural Research Organization), develops dehumidification systems specifically for greenhouse environments and is already on the cutting edge of the field. Accompanied by growing amounts of research finding dehumidification to be a major factor for preventative pest control, such as the blight-causing P. infestans, and IPM (integrated pest management) growing as a real-world approach, there is no doubt that DryGair’s systems are on the verge of being a green-household item.

Rona Orlicky, DryGair CEO: “Proper dehumidification can lead disease control when it comes to moisture-loving microorganisms. Research already shows outbreaks can be prevented when humidity levels are monitored and controlled.”