This puts crops at risk of yield loss and low quality production. It also demands higher energy consumption to battle, at a high economic and environmental price. Dehumidification in greenhouses and grow rooms is the key to preventing outbreaks and other humidity related problems. 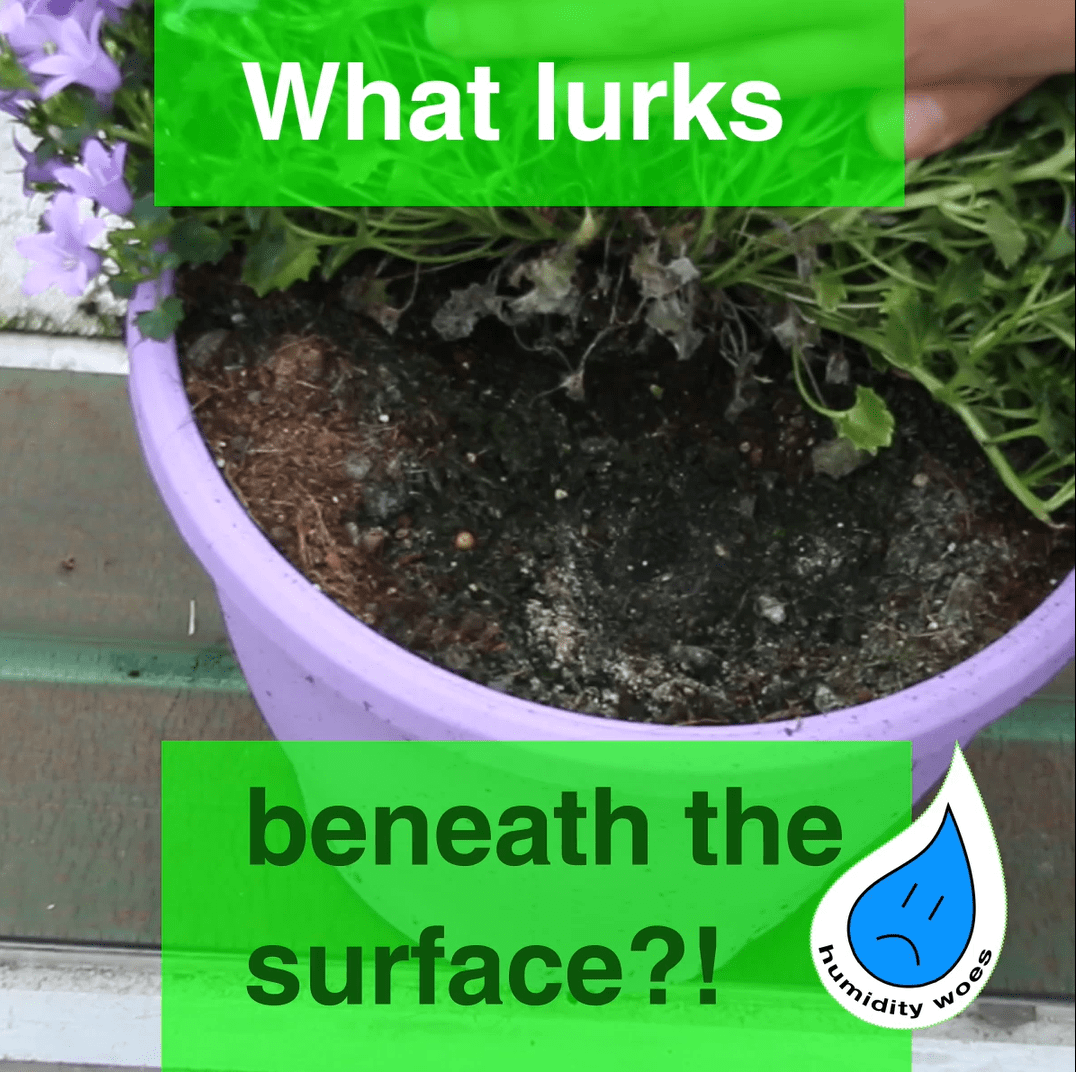 What lurks beneath the surface?

Botrytis is one of the most widespread humidity related problems.

There are Over 200 species of the botrytis fungi that cause gray mold. The disease affects almost every type of greenhouse crop and disperses when there’s a sudden drop in humidity, coupled with a rise in temperature. This is most common in the early morning.

Usually, a botrytis infection will only become visible after two or three weeks. If the infection can be seen with the naked eye, the mold has most likely already have penetrated the plant.

Botrytis infections in flowers are not visible initially. Tissue that looks brown and wet near an infection site is one of the first symptoms that indicate a possible botrytis attack. Lighter colored spots on the flowers, with a dark brown ring around them, can also indicate a mold infection.

In cannabis, botrytis is known as bud rot, due to the rotting it causes inside the cannabis buds.

The optimum temperature for botrytis fungal growth is around 24°C (75°F), but it can withstand temperatures close to 0°C (32°F). However, what’s more important is humidity. If humidity levels are high, botrytis can attack in a wide range of temperatures.

Seasons: this disease usually breaks out during the spring.

Prevention: botrytis can be prevented by reducing relative humidity and removing any free water from the plant’s environment such as spray from watering, especially during nighttime. Removal of dead leaves and fruits may also help inhibit its spread. 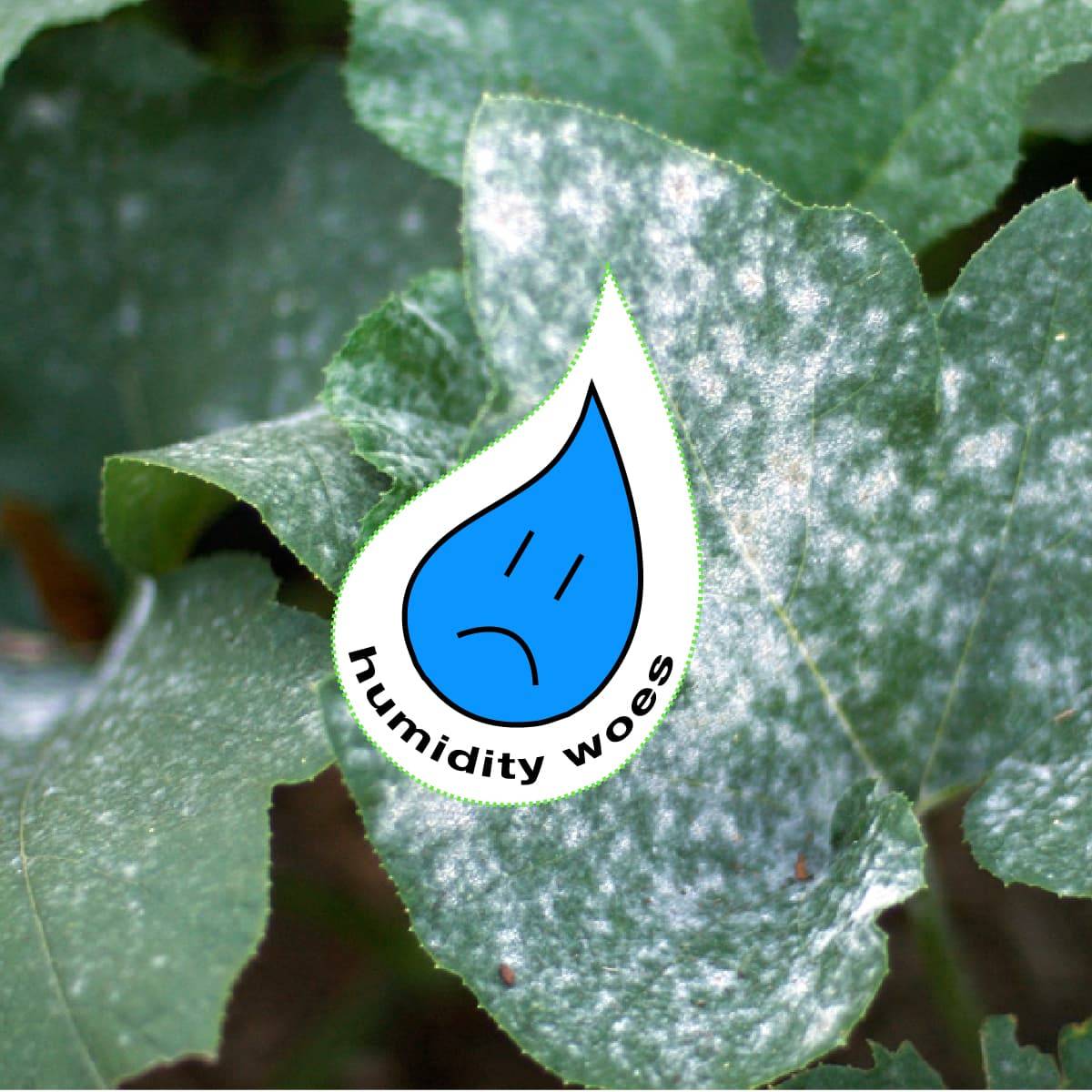 Is that flour on your flower?

Powdery mildew appears as white, powdery spots of spores on the upper and lower surfaces of leaves as well as on stems, usually affecting the lower leaves most.

Infections by this fungus are more common during the spring and fall due to higher temperature fluctuations between day and night, causing high relative humidity levels, especially at night.

Unlike other humidity related problems and foliar diseases, powdery mildew doesn’t require water on the leaves to thrive. What triggers it is the fluctuating humidity levels: high nighttime humidity levels trigger the formation of spores, while low day time levels encourage dispersal.

These conditions are common in greenhouse environments, so make sure you keep your night time humidity levels low to keep this fungus under control!

Prevention: Growers can prevent powdery mildew by reducing relative humidity and regularly removing infected leaves. Most growers use heta to control this fungus as it’s spores can’t survive in temperatures above 34°C (93°F). 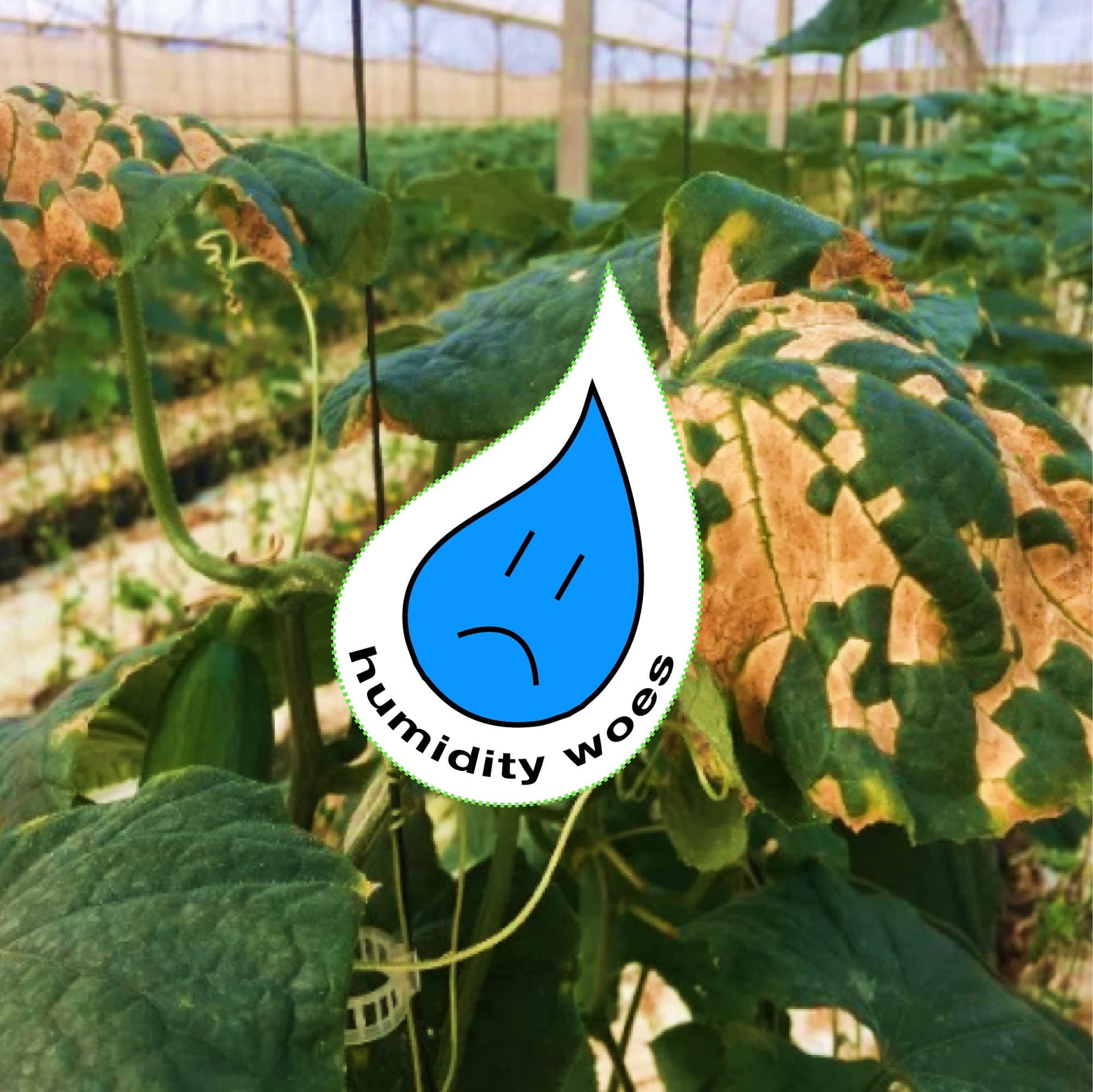 Downy Mildew got you down?

This fungal disease erupts when water is present on plant surfaces on a wide variety of crops including cucumbers, basil, and ornamentals.

You can identify downy mildew by the yellow spots on the leaves’ surfaces. These can cause the leaves to distort, dry out, and fall off. Downy mildew can spoil fruits as well.

Downy mildew can be a difficult disease to fight off once it gets a hold in your greenhouse. Like other humidity related problems, the best tool for fighting it off is prevention.

Spores travel through the air so ventilation may play a key role in the infection and spread of the fungus throughout a grow space.

Susceptible crops: cucurbits, ornamentals, and most vine based crops.

Prevention: reducing relative humidity and removing any free water from the plant’s environment, such as spray from watering, can help prevent downy mildew. 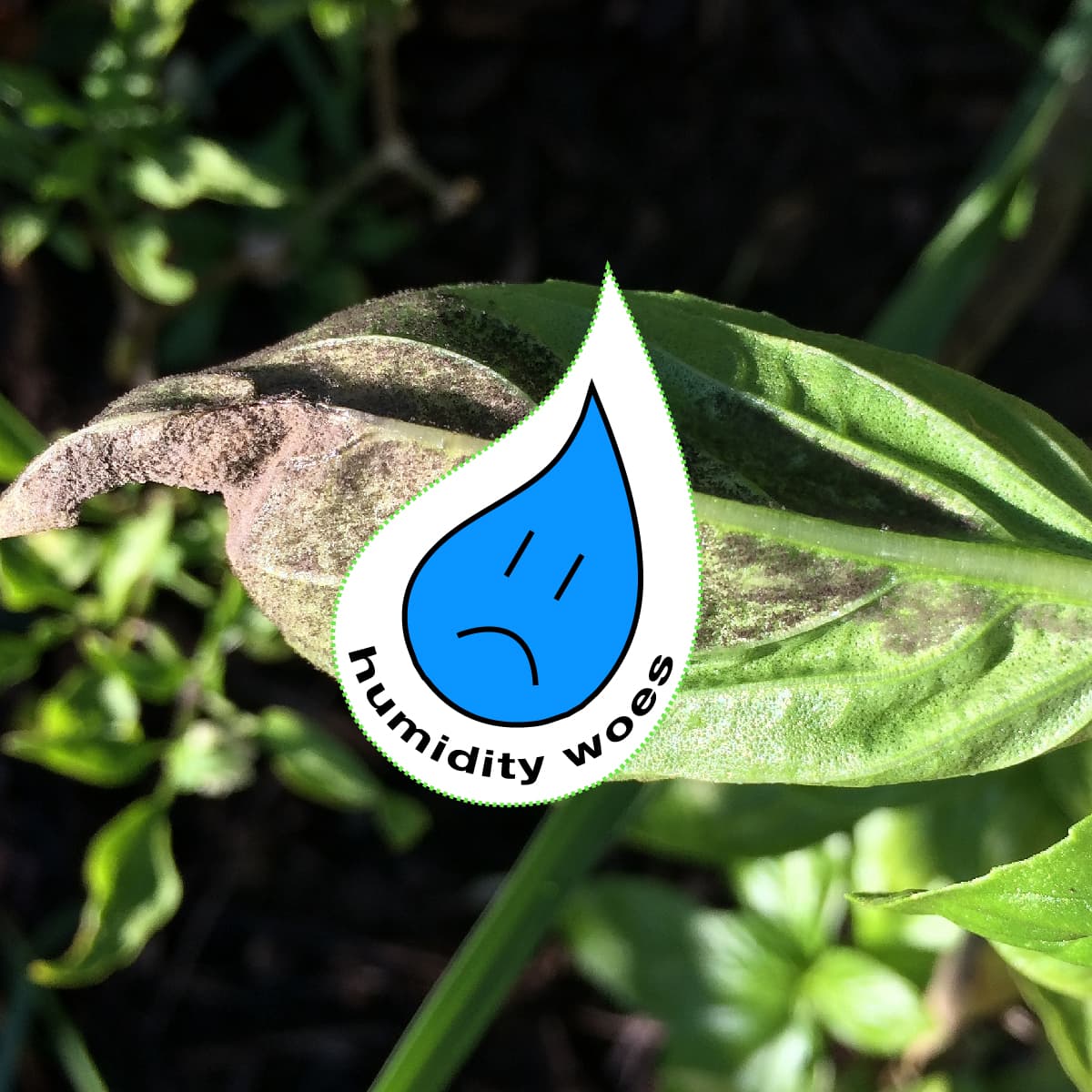 I wouldn’t want that in my pesto.

Downy mildew comes in a wide variety of crop-specific strains, the most common of which is basil downy mildew.

Basil downy mildew is a fungal disease which is highly contagious and appears with little warning. Basil downy mildew causes dark spores to appear around the bottom of the leaves, slight leaf distortion, and a change of coloration to bright green or yellow.

Sporulation occurs when infected plants are incubated for at least 7.5 hours in the dark in a moisture saturated atmosphere at 10-27°C (50-80°F). Interestingly, research finds that direct light may fully inhibit spores’ formation under certain conditions.

It is suggested that basil downy mildew can be eradicated using daytime solar heating and/or nocturnal fanning in net and plastic houses year-round.

Don’t crack under the pressure! 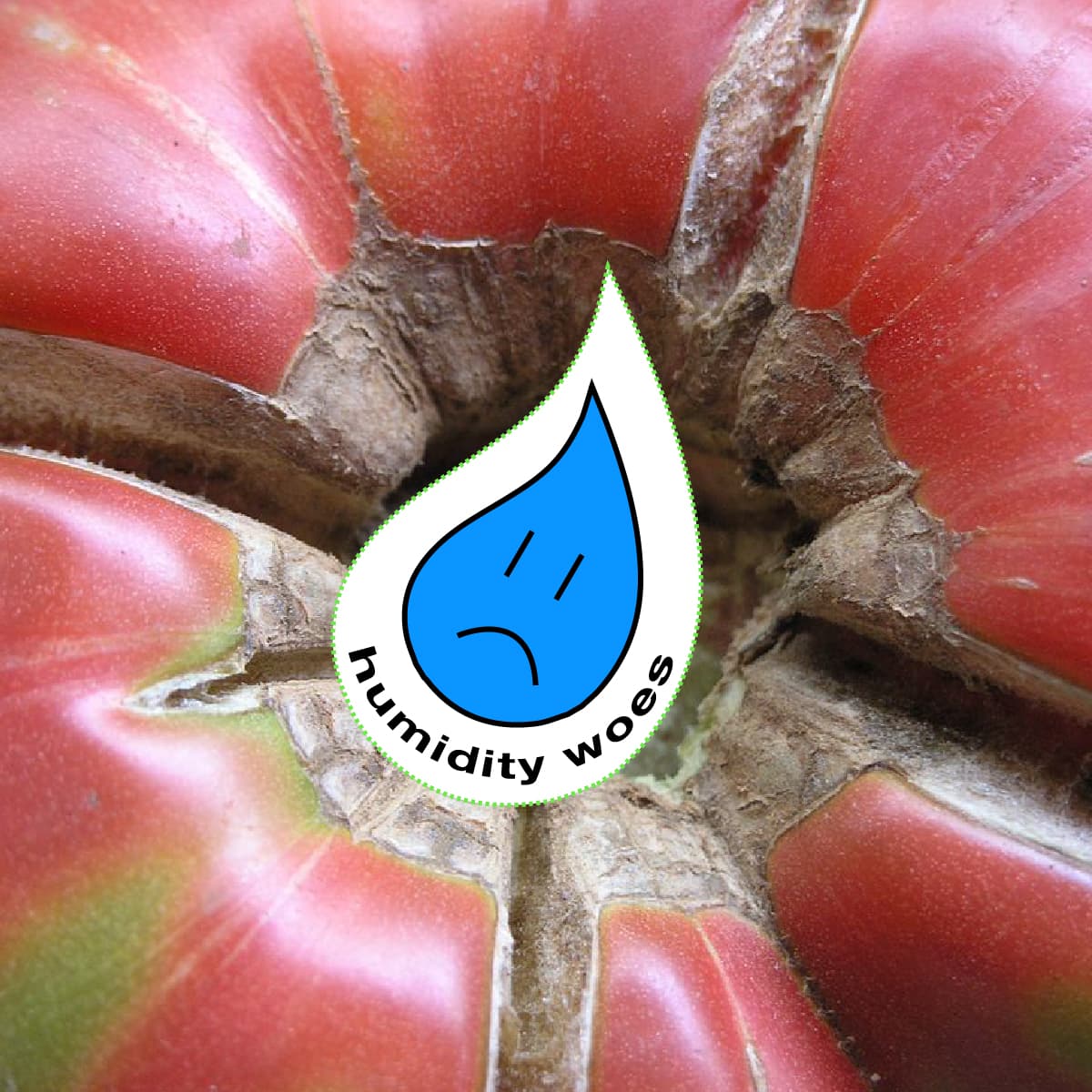 Tomato fruit splitting appears as fruits mature and can be caused by a few factors including high humidity. When humidity rises, transpiration slows down and water pressure builds within plant roots.

As the pressure builds, the fruit stretches and expands until it eventually splits. Other causes include high temperatures, fluctuations in soil moisture, and changing growth rates.

Fruit cracking is most prevalent when there is a rapid uptake of water into the fruit during ripening when the fruit is accumulating solids. The combined pressure of accumulated water and solutes can split the fruit in tomato varieties with relatively low skin elasticity.

In addition, during heavy rain events, water can enter the fruit at the stem scar or through minute cracks in the skin shoulder, causing extra pressure and larger cracks.

Susceptible crops: tomatoes and other members of the Solanaceae family.

Edema is a phenomenon caused by environmental conditions, not by an organism. However, it can cause severe damage if not treated in time. Excess amounts of water accumulate in the plant’s tissue and the pressure may cause the cells to deform or even explode.

Edema is characterized by blisters, bumps and water soaked areas primarily on the underside of leaves. These bumps and blisters turn brown and become corky, which is dangerously irreversible.

Alternaria species produce diseases whose most common symptom is circular, target like spots on leaves. These spots can be yellow, dark brown or black and may develop on all parts of the plants. The centers of these spots may fall out, giving the leaf spots a shot-hole appearance. Individual spots can connect into large dead areas, and leaves may fall.

In some cases, as with tomatoes or potatoes, it may attack fruits, producing black round or oval spots and spoiling crops. In young seedlings, Alternaria may affect stems, creating spots of grayish-brown color, causing rot that often kills the plant.

Seasons: most likely to occur during autumn and summer.

Prevention: reduction of relative humidity. Alternaria usually targets single crops and the fungus builds up in the soil. Crop rotation may help to avoid build-up.

Erwinia is a type of bacteria that causes plants to rot.

The bacteria release materials which break down the plant to a liquid mush that the bacteria can consume. Symptoms may appear anywhere on the plant, with wet, mushy spots appearing on leaves, stems, and base of the plant.

Erwinia may release a fishy smell as it breaks down plant tissue.

Prevention: reduction of relative humidity and removal of free water. These bacteria travel through water so spraying is a major factor for its dispersal.