How it Works – Introduction to Hydroponic Agriculture Series Part 1

Hydroponic agriculture, as the name suggests, is the method of growing plants in water, instead of soil.

This is part of an entire new generation in farming, and the focus of our new series of articles. We will review different aspects from its history to its part in the future of agriculture.

The world has seen a rise in environmental and sustainability awareness over the past couple decades, bringing many conventional agriculture methods into question. This trend brings to light many techniques which reduce water, land, pesticide, and energy use. This has propelled hydroponics to the forefront of agritech. From local greenhouses to massive grow operations, from lettuce to medical cannabis.

The concept of hydroponic farming is far from new. One of the most ancient examples of growing crops on water is China’s floating gardens, which consisted of floating rafts fashioned from reeds. These raft-based gardens are famous for the cultivation of “Chinese cabbage”, and could be found across southeast China. The earliest records of such gardens are traced back to the 4th century. 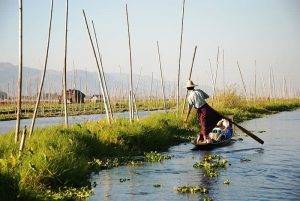 A similar technique can be found in Central America, where floating gardens are created on lakes, by interweaving reeds and stakes to form platforms. By laying soil on these rafts, they create artificial floating islands. These are called “Chinampas”, the earliest of which are dated back to the 12th century. Though these existed prior, they are commonly tied with the Aztecs, who conquered lands (or rather waters), on which chinampas were built. The Aztecs were also responsible for scaling the chinampas to mass production.

Modern hydroponics have a long and elaborate history. The first development of a soilless growing technique, using a nutrient rich water solution, was back in the late 19th century, based on the research of two German botanists, Julius von Sachs and Wilhelm Knop.

The term “hydroponics” is much newer. It was coined in 1937 by Frederick Gericke, of the University of California at Berkley. Initially gaining fame for growing a 25-foot-high tomato vine in a mineral nutrient solution, Gericke was a champion of hydroponics, promoting it through his 1940 book “Complete Guide to Soilless Gardening”.

In the second half of the 20th century, NASA, as part of its Controlled Ecological Life-Support System program (CELSS), began studying and testing different techniques of hydroponics in order to develop a farming method suitable for off-Earth farming.

The actual science behind hydroponics is, in fact, quite simple.

Plants need several basic parameters in order to photosynthesize, and therefore grow. These are oxygen, CO2, light, nutrients, and water. Lighting and CO2 are not relevant to the soil, so we’ll put them aside for the sake of this explanation.

Plants absorb nutrients by taking in water, which acts a carrier, through the roots. The water carries nutrients throughout the plant, providing the cells with what they need. The nutrients are traditionally provided by the soil itself.

In a soil-less environment the basics remain the same. The roots are based in water, thus providing the means to carry material through the plant. The nutrients, instead of being found in the soil, are produced from minerals and manually added to the water itself.

There are many factors to consider, in order to provide the best conditions when growing hydroponically. Greenhouse growers should monitor and maintain these parameters, regardless of the growing technique used.

The two most basic parameters used by all growers are pH and EC (electric conductivity) of the water.

pH levels are an indication of the acidity of the water, which is critical for ensuring that the roots absorb water and nutrients efficiently. Plants differ in their optimal pH levels, stemming from their evolutionary history.

EC, measures the electrical conductivity of the water which gauges the amount of minerals contained within it. Optimal EC levels also differ among crops, though all need a certain minimal level to ensure that nutrients are in fact present in the solution.

The roots are also responsible for oxygen uptake. So, in order to effectively photosynthesize, the presence of oxygen in the root area needs to be taken into consideration.

The easiest and most basic form of hydroponic growing. This technique is pretty straightforward and many beginners and home gardeners utilize it.

This method resembles the ancient water gardening practices, earning it the nickname – “floating rafts”. Deep water culture systems consist of a body of water and a raft containing holes. The crops are placed in the holes and positioned by the raft so that the roots are submerged in water, while the rest of the plant is above water.

As with all techniques, growers add nutrients to enrich the water. Due to the fact that the roots are constantly submerged and do not come into contact with air, oxygen needs to be introduced into the water itself. Growers can achieve this using a basic air pump, like in a fish tank. 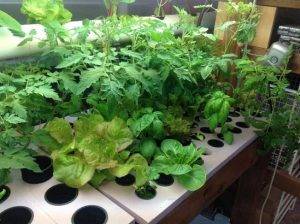 Also known as “flood & drain”. This method consists of placing plants in an inert growing medium, such as perlite or coco coir. These mediums, unlike soil, contain no nutrients for the plant to consume. Instead, the nutrients are provided by water contained in a separate reservoir. This water occasionally flows into the growing medium, flooding the base of the plant. Once it reaches a certain point, the water drains automatically. This can be achieved through several methods, the most common of which is with the use of a water pumps and siphons.

In this scenario, as the roots spend time both in and out of water, the air directly provides oxygen.

This is perhaps the most popular method among large-scale commercial operations.

NFT is based on moving water flowing through the root zone. The most common method is using a series of slightly tilted pipes, placing the plants in holes on the top of the pipes. Water pumps transport the nutrient rich water from a separate reservoir to the top of the pipe formation. From there the water flows slowly through the complex and returns to the tank.

You can provide oxygen to the water tank by using one of two methods. Either by using an air pump, or by creating a “waterfall” from the pipes to the reservoir. The impact of the falling water cause air to mix into the resevoir.

Many growers consider this method to be the most efficient in terms of land-use, due to the ability to easily stack plants vertically. This makes NFT the leading technique in modern commercial hydroponic farms. 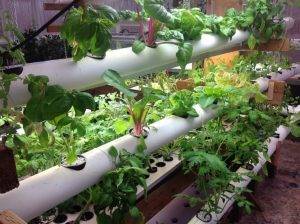 Hydroponic agriculture comes in many shapes and forms, but all are based on the exact same concept. It aims to provide the plants with what they need, while striving for maximum efficiency, for both crop and grower.

In the coming articles we will discuss the pros and cons of hydroponics and additional methods of technology based growing.

This is the first of a series on the emergence of hydroponic agriculture and modern, technological farming. Read Part 2 – Pros & Cons of Hydroponics or skip to Part 3 – Controlling Water & Climate Conditions.