Powdery mildew is a humidity related fungal disease caused by a range of fungi species. It is an extremely common mold, found around the world. This mold affects solanaceous crops, such as tomatoes and peppers, as well as cucurbits, including cucumbers and melons. It is also a common problem in cannabis cultivation.

Powdery mildew slows plant development, and in severe cases may cause plants to die. This disease gets its name from the powdery spores that appear on infected leaf surfaces. Symptoms usually begin from older, lower leaves and includes a loss of color.

Additional symptoms include yellow or bright green spots, or white-gray powdery coating on the upper side of the leaf. You may also find powder-like material on the underside of the leaves, stems and petioles. In cucurbits and cannabis, small dark brown spherical structures may also develop on the leaves, usually in later stages of the growing season. These structures are created to protect the spores and may become a source of infection in following seasons.

The easiest, most cost-effective way to reduce powdery mildew related yield loss, is by preventing outbreaks. This is also a basic guideline of integrated pest management, an approach designed to minimize both the costs and the toxicity associated with pest and disease control.

Fungal spores are omnipresent. They exist in the air and in the soil and are extremely difficult to avoid. But the spores themselves don’t actually have a negative effect on plants. It is only when spores develop into mold that plants are actually infected.

There are several ways to prevent the outbreak of powdery mildew: 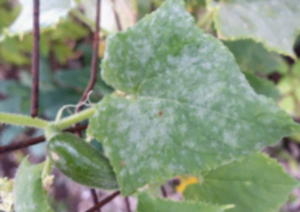 It’s possible to avoid powdery mildew completely, by growing resistant or tolerant plant strains. This is especially achievable in cucurbits, with resistant strains of melons, cucumbers and more readily available on the market.

Avoid watering from above

A necessary factor in the formation of these types of diseases is the presence of water. Without it, the spores may never turn into actual mold. This puts irrigation on the spotlight.

You should always water straight to the ground, avoiding water on the leaves themselves.

Another way of avoiding the presence of unwanted water drops is to be aware of the dew point, which is the temperature at which water condenses on structural elements and the leaves themselves.

Irrigation isn’t the only way water reaches a greenhouse. The plants themselves constantly transpire water vapor to the air. When this humidity builds up, water may begin to condense, appearing on leaves and various structural elements. One point of contact with free water is enough to initiate a mildew outbreak. Removing the water after the fact will no longer stop the spread.

It’s possible to drastically reduce the appearance of water, by controlling the humidity in the space, using a dehumidifier.

Although true in most situations, lighting is very important in preventing powdery mildew. Lighting has multiple effects in this regard.

Firstly, a shaded plant will most likely be cooler, making it much more likely for water to condense on its leaves. If water does form on the shaded plant, the lack of radiation may cause them to stay longer, rather than evaporate, further increasing the danger of infection.

Additionally, plants that receive less than optimal radiation, do not grow as strong, making them more vulnerable to a wide array of diseases, powdery mildew among them.

Overcrowding plants is never a good idea. In addition to making it easier for plants to infect one another, it directly affects the lighting and water presence.

Keeping a less crowded grow room allows more air and light to pass through the canopy. This increases evapotranspiration, making it harder for water to form and stay on the plants. A spacious grow will also perform better due to less competition, leading to improved transpiration and nutrient uptake.

Air circulation, at its most basic, achieves what good spacing achieves. The air movement contributes to the evapotranspiration, leading to less humidity problems, less water presence and increased plant stimulation.

Good air circulation also assists in creating a more uniform climate, making it much easier to control the conditions throughout the entire greenhouse and limit powdery mildew’s enabling factors.

Being alert is critical in maintaining outbreaks. If caught early on, an initial powdery mildew infection can be halted simply by pruning, without having to introduce unnecessary materials into the greenhouse.

The infection normally begins with the lower older leaves. When symptoms begin to appear, remove the affected areas. Discarded leaves and plants should be removed from the growing space, as the fungal spores may still spread through the air.

Use a preemptive bicarbonate solution

There are many homemade brews to help with powdery mildew infections, but a bicarbonate solution is the only one you should consider for preemptive use, as well as post-outbreak treatment. This is a mixture of baking soda, oil, soap and water. Baking soda has a high pH level, creating an alkaline environment, which is unsuitable for fungal spores.

Most recipes call for 1 tablespoon of baking soda, 1 tablespoon of vegetable oil and 1 teaspoon of liquid soap, mixed into 1 gallon of water. It’s also possible to switch out the baking soda for potassium bicarbonate, which is considered less harsh. Experimentation is the key to finding the best mix for a certain crop.

In any case of using homemade solutions, it is recommended to mix the ingredients well and spray the plants once or twice a week, depending on solution and crop. Each solution may have its own optimal application time, some are better during the day, while others should be applied overnight.

It’s also best to test each spray before widespread application. You can test on a single plant or even a single leaf.

Treating any mold or disease should be a last resort. You should always strive to avoid outbreaks completely, using a good mix of prevention measures. But infection may be inevitable. In which case, it’s good to have an array of treatments, which may be alternated for maximum effect.

The following treatment methods have varying degrees of toxicity, but all are preferable to commercial fungicides in terms of human, plant and environmental health.

Milk has recently been found to contain anti-fungal properties that are great for combatting powdery mildew. In fact, studies have found it to be as effective as commercial fungicides. This is a simple mixture of 1/3 milk and 2/3 water, applied weekly.

Neem oil, extracted from the neem tree, native to India, is a well-known insecticide and fungicide. Growers use it for a very wide variety of ailments. Neem oil is an organic material readily available in health food stores.

When it comes to powdery mildew, neem oil has been found to vary between moderately effective to very effective. Mix 3 tablespoons of neem oil in a gallon of water and apply once every week or two.

Garlic’s high sulfur content makes it a great fungicide. To use effectively, the garlic needs to be turned into a solution, which may be homemade, or purchased as garlic oil.

Home recipes vary, but the most basic version requires mixing 6-10 crushed garlic cloves in a liter of water, preferably using a blender or mixer. It is possible to add an ounce of organic oil, such as neem oil. Strain the resulting liquid using a cloth.

Whether using garlic oil or a homemade solution, you need additional diluting – 1/10 garlic solution and 9/10 water.

As previously mentioned, sulfur is highly effective at killing fungal spores. It is a natural product that comes in the form of liquid or powder.

Although natural, sulfur is harmful to microorganisms in the soil and may harm beneficial insects. It is also moderately toxic to humans. So you should take maximum caution when handling, including protective gear.

As a relatively toxic solution, sulfur is subject to regulation, meaning it may not be a viable solution. Even when complying with regulation, the use of sulfur should be a last resort, after all other prevention and treatment methods have proven ineffective.