Home » Radiation, Transpiration, Leaf Area Index, and Everything in Between

Radiation, Transpiration, Leaf Area Index, and Everything in Between

Radiation, or light, is a major factor in designing complex growing environments, as it affects all other climate parameters. This post will cover:

Light quality refers to the relative proportion of photons received at each wavelength per unit area. Wavelengths shorter than 400 nanometers are called UV and are commonly separated into 3 areas, all of which are powerful and can cause skin diseases for humans: 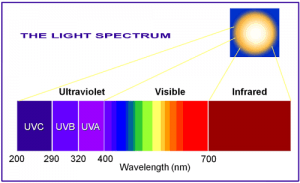 On the other side of the spectrum, wavelengths greater than 700 (nm) create heat. It is believed that UVA radiation strongly influences the creation of secondary metabolites in the plants. For example, THC and other molecules that have a role in protecting the flowers. It is common to say that UV radiation activated the plant’s defense mechanism. 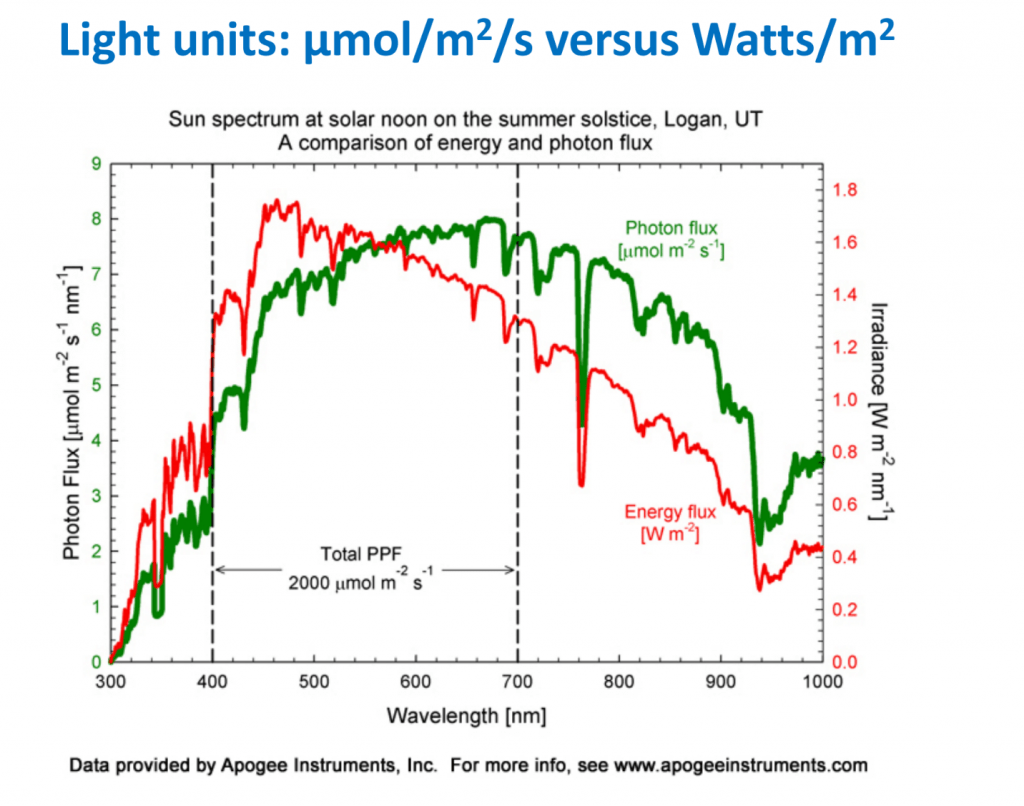 There are 2 types of chlorophyll in plants. Prior to extensive research in recent years, wavelengths in between the red and blue were considered less useful for the plants. Today we know that these wavelengths are crucial for various processes involved in the creation of phycoerythrin, phycocyanin, and carotenoids and more.

Blue wavelength is not the highest in quantity, but its energy is very high. Blue light is important for stomatal opening and chlorophyll synthesis. Red, or far-red light, determines elongation in plants. In fact, plants exposed to blue light grow smaller in size, compared to plants that receive more red light.

Until recently, high-pressure sodium lights (HPS) were widely used in agriculture. Yet, the spectrum it creates is rather narrow and focuses mostly around the orange and red wavelengths. Metal halide lighting is more useful and has a wider spectrum but proved to be unreliable and in need of frequent replacement.  LED lighting is currently rather expensive, in some cases up to 5 times the price of an HPS light. Additionally, LED lighting requires a hefty investment in infrastructure, due to different light distribution.

Radiation for Cultivation in Growing Facilities

The inverse square law states that a specified physical quantity is inversely proportional to the square of the distance from the source of that physical quantity.  If a light source’s location doubles in distance, the coverage area multiplies by 4. 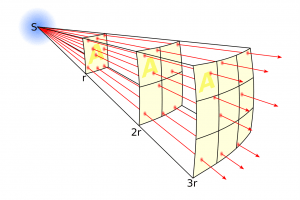 This simple physical law can help us understand the amount of light we would like to have for a given plant’s setting.

Leaf area index (LAI) can be calculated by how many layers of foliage can cover 1 square meter. The values usually range from 1 to 4.5. The absorption coefficients for radiation don’t change in a ratio of 1:1 compared to the LAI. The reason for that is that in modern agriculture, plants are grown in rows, and do not get the light uniformly and equally from all directions. Also, leaves on the lower part of the plant tend to be less active. When compared to younger leaves, we see calcium accumulation on these lower, older leaves.

In “Transpiration of greenhouse crops: an aid to climate management” (1987), Dr. Cecilia Stanghellini calculates the transpiration of plants with LAI value of 3, in different humidity and temperature levels. Her research provides a baseline of how to calculate the amount of water released to the air, depending on the amount of radiation. 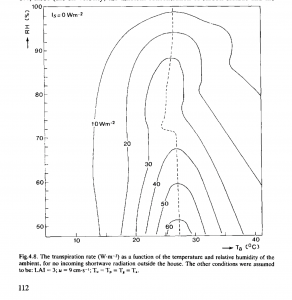 Typically, above a certain temperature plants will transpire less, due to several reasons. Mostly due to the ability of the plant to close its stomata to avoid water loss. A state in which a plant transpires heavily doesn’t necessarily mean that it’s the most active. It’s usually only true for leafy greens. Some fruit bearing plants can lose control over their stomata and lose significant amounts of water uncontrollably. Some evidence shows that irrigating with saline water can reduce nighttime transpiration by up to 30%.

HPS light (high-pressure sodium) made the plant grow taller because of the amount of red light. The other 2 lighting types were different versions of LED with higher levels of blue light, but with a combination of red light as well. The NS1 is the LED type with a better combination of blue and red light, and therefore had the highest amount of cannabinoids and overall yields. Additionally, we know that a combination of ~30°C and radiation of 1,000 – 1,500 µmol/m2/s will result in optimal photosynthesis in cannabis. (Chandra et al., 2008) 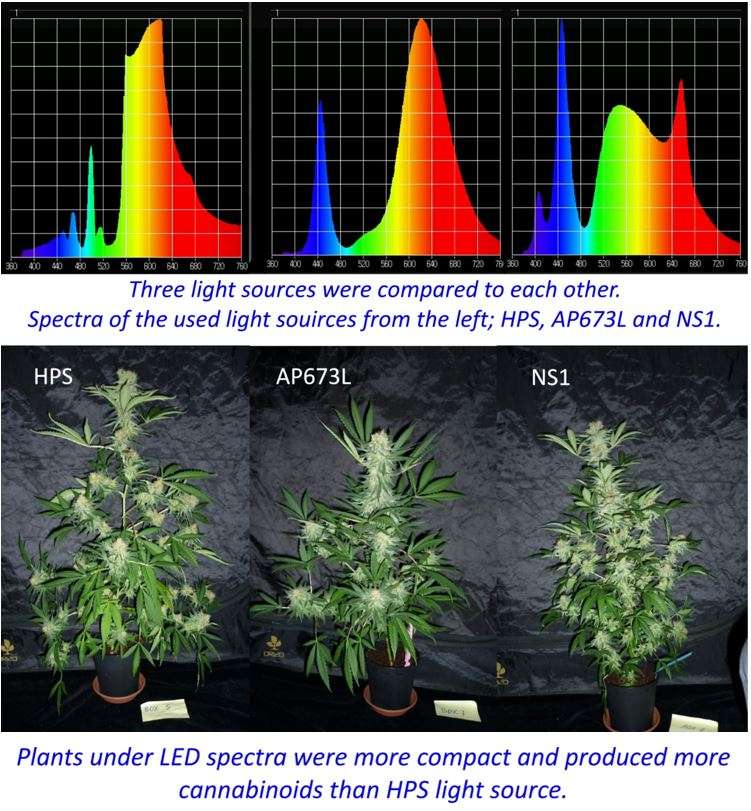