Home » What are the Optimal Humidity and Temperature Set Points for Greenhouse Growing?

What are the Optimal Humidity and Temperature Set Points for Greenhouse Growing?

The optimal humidity and temperature set points for greenhouse cultivation are:

Relative humidity is a critical climate parameter in the cultivation of any crop. So most growers aim to maintain optimal humidity ranges, corresponding with the plants they grow.

The optimal relative humidity setpoint for most plants is around 80%. At this level, growth rates are highest for common greenhouse plants. At higher or lower humidity levels, plant physiological processes may slow down, leading to slower growth and lower quality output.

Humidity is a climate parameter that growers should understand, control and maintain to suit their target crops, rather than simply attempt to reduce it to a minimum.

These temperatures are considered optimal for most common crops, which is why we find them in most greenhouses around the world. Temperatures outside of this range would normally lead to slower or halted growth and suboptimal crop quality, which is why growers rarely stray from it.

Controlling humidity in greenhouses and indoor growing facilities is a necessity. As untreated humidity, in such settings, leads to major problems and inefficiencies. When crops experience conditions that aren’t optimal to them, they grow slower, smaller, and their quality is reduced.

Unchecked humidity will cause condensation inside any facility. The presence of this free water leads to the development of diseases such as botrytis and downy mildew, which can rapidly destroy large amounts of vegetables, cannabis or any other crop.

The following graph presents the water extraction rate of the new DG-12 EU unit, at temperatures ranging from 12oC to 24oC (64ºF – 75ºF). 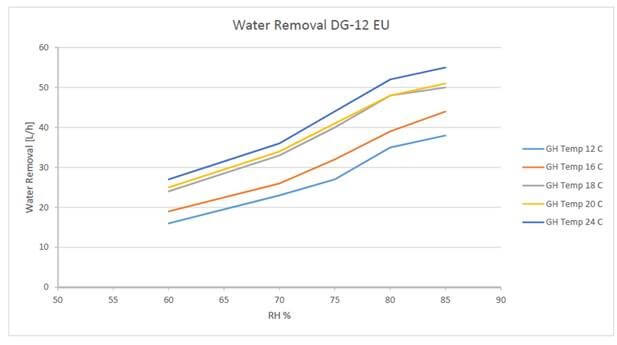 It’s possible to see that extraction rates rise as temperature and the relative humidity rise.

Under optimal greenhouse conditions of 80% relative humidity and 18oC, the unit removes 48 liters of water per hour. At higher temperatures, the unit extracts water at a higher pace.

DryGair is one of the only dehumidifier manufacturers with the sole focus of humidity control for agriculture. The units are designed to provide an optimal humidity reduction at common cultivation conditions of 18oC and 80% relative humidity. This helps DryGair operate efficiently, extracting more than 4 liters (1 gallon) per kWh.

As a solution for greenhouses and indoor cultivation, DryGair units should operate during specific problematic periods:

Spikes in relative humidity can cause dewpoint condensation, leading to the development of various diseases. DryGair’s humidity control solution is designed to avoid these peaks, which are most common during dusk and dawn when conditions outdoors change rapidly.

Click here for a comparison of all DryGair units.