What Is the Dew Point

What Is the Dew Point and How Does It Affect Greenhouse Humidity Control?

Humidity, and especially the dew point, is a critical factor in greenhouse and indoor cultivation. This article explains the importance of humidity in the greenhouse, what the dew point is, how to calculate it, and how to avoid it.

RH is determined by two factors – the amount of water vapor and the air temperature. With this in mind, we can understand the importance of relative humidity in a growing facility.

Why Is It Necessary to Maintain Greenhouse Relative Humidity Levels?

Humidity is a major factor in the cultivation of most vegetables, herbs, and flowers. It’s the main cause of botrytis, an extremely common and devastating disease.

Botrytis is also a very common issue in cannabis cultivation, often referred to as “bud rot“.

Due to the dense nature of the cannabis bud, it’s highly susceptible to humidity build up. This is due to the plants’ constant transpiration through the leaves. In cannabis, this is intensified, as the bud itself contains leaves, known as “sugar leaves”. The dense bud traps the humidity and causes it to build up.

Humidity is water vapor in the air, but the real peril is actual liquid water. Water tends to condense on cold surfaces. And this is the tricky part, the plant itself may be the cold surface!

Plants transpire as they cool themselves off, sort of like sweat, which renders them colder than their immediate environment. With cannabis, the humidity, which is created inside the dense bud, condenses on the cold surfaces, also inside the bud. This is great for mold and a major concern for growers.

To better understand the relationship between humidity and air temperature, we should have a look at the dew point.

What Is the Dew Point?

The dew point is the point at which air becomes saturated with water vapor, forcing the water to condense from a gas form into liquid. Basically, it’s the temperature at which water begins to appear.

This is a dew point chart, also known as the Psychometric table:

This may not be intuitive, as water vapor is invisible, so we’ll use an everyday life example.

When you pour a cold drink into a glass, you’ll notice water forming on the outside. This happens because the cold drink lowers the temperature of the glass, pushing it below the dew point.

The water vapor from the surrounding air condenses onto the outside surface of the glass and that’s where you get the formation of water droplets.

This is the basic concept. The dew point is the temperature at which humidity turns into water.

How the Dew Point Works

There is a tight relationship between temperature and relative humidity.

It’s easy to think of air as a sponge in this scenario; it contains water up to a certain point and once it is full, water begins to appear. If the temperature is constant, we can reduce the relative humidity by removing water vapor from the air. This would stop the appearance of water.

Water condensation can be managed and prevented through control of humidity and temperatures, such as with DryGair’s dehumidifiers. This is the important part- the dew point is basically a breakdown of this relationship.

How to Calculate the Dew Point

The following graph represents the dew point as a function of RH at a given air temperature: 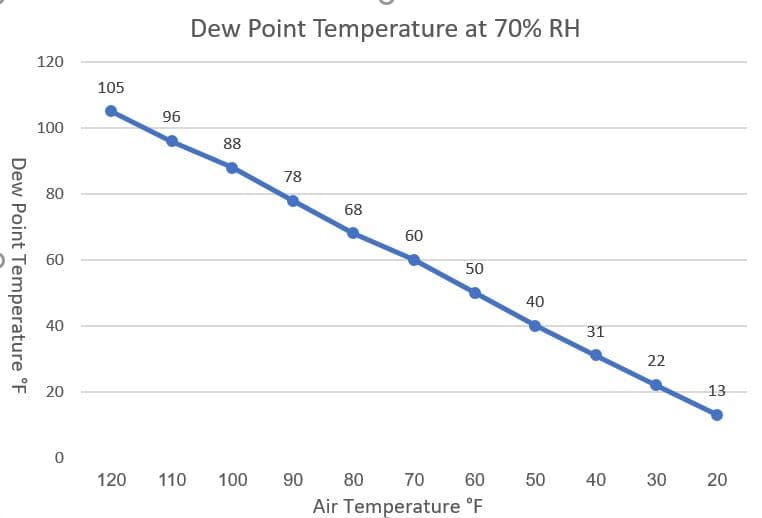 This graph represents 70% RH. You can notice that at an air temperature of 70°F (bottom axis), the graph aligns with 60°F dew point temperature (left axis). This means that if your greenhouse air is currently at 70% relative humidity at 70°F, you can go as low as 60°F before liquid water begins to appear.

If any one surface in the growing facility reaches 60°F or below, water will condense on it. Cooler surfaces are typically ceilings and walls, which have greater contact with the outdoors, as well as metal pipes and railings, or as we mentioned earlier, the plants themselves.

Understanding the dew point and the factors that affect it provide us a better understanding of what’s really going on in the greenhouse. What really happens when we heat up or allow the air to cool down. It’s not just about temperature, it’s about humidity as well and the dew point encapsulates this.

For more information on dew point humidity control check out the DryGair Solution.

Want to get DryGair news and articles delivered straight to your inbox?