What Is VPD (Vapor Pressure Deficit)?

What Is VPD (Vapor Pressure Deficit)?

Vapor pressure deficit (VPD) is one of several methods growers use to measure humidity in a greenhouse or growing environment. It allows growers to gauge the impact of humidity on plant growth and development.

VPD measures the difference, in terms of pressure, between the water vapor in the air, and the air’s saturation point, which is the maximum amount the air can carry at its current temperature. The point of complete saturation is also called the dew point.

This pressure difference is what drives transpiration from the plants’ stomata.

Many growers use RH (relative humidity) to measure the humidity level in a greenhouse. This measures the percentage of the air’s water content saturation at a certain temperature. While RH is great for managing humidity, it doesn’t tell us much about the forces driving evaporation from the plants.

VPD, as opposed to RH, correlates with plant transpiration rates, making it a proactive tool for plant empowerment, rather than simply a climate parameter.

We consider the water content of a living leaf to be 100% RH, meaning completely saturated. While the air is normally undersaturated. This enables water to flow from the plant to the air.

If VPD is high, meaning the air is relatively dry, transpiration rates will increase. As the vapor pressure deficit lowers, transpiration will decrease or even stop completely.

There is a direct connection between plant metabolism and transpiration. As water evaporates from the leaves, it “pulls” water through the roots. This water contains the nutrients required for plants to grow, develop and bear fruit.

Low VPD, meaning low transpiration, would cause plant metabolism to slow down, inhibiting development, while also increasing susceptibility to diseases.

But VPD is problematic as well. At high levels, meaning dryer air, the evaporation rate from the leaf’s stomata may be too fast, causing it to dry out.

Very high vapor pressure deficit could lead to water stress, a situation in which the plant goes on the defense, in an effort to retain water. The stomata close in order to prevent evaporation, which in turn stops the intake of CO2, which also impedes growth.

How to Measure VPD 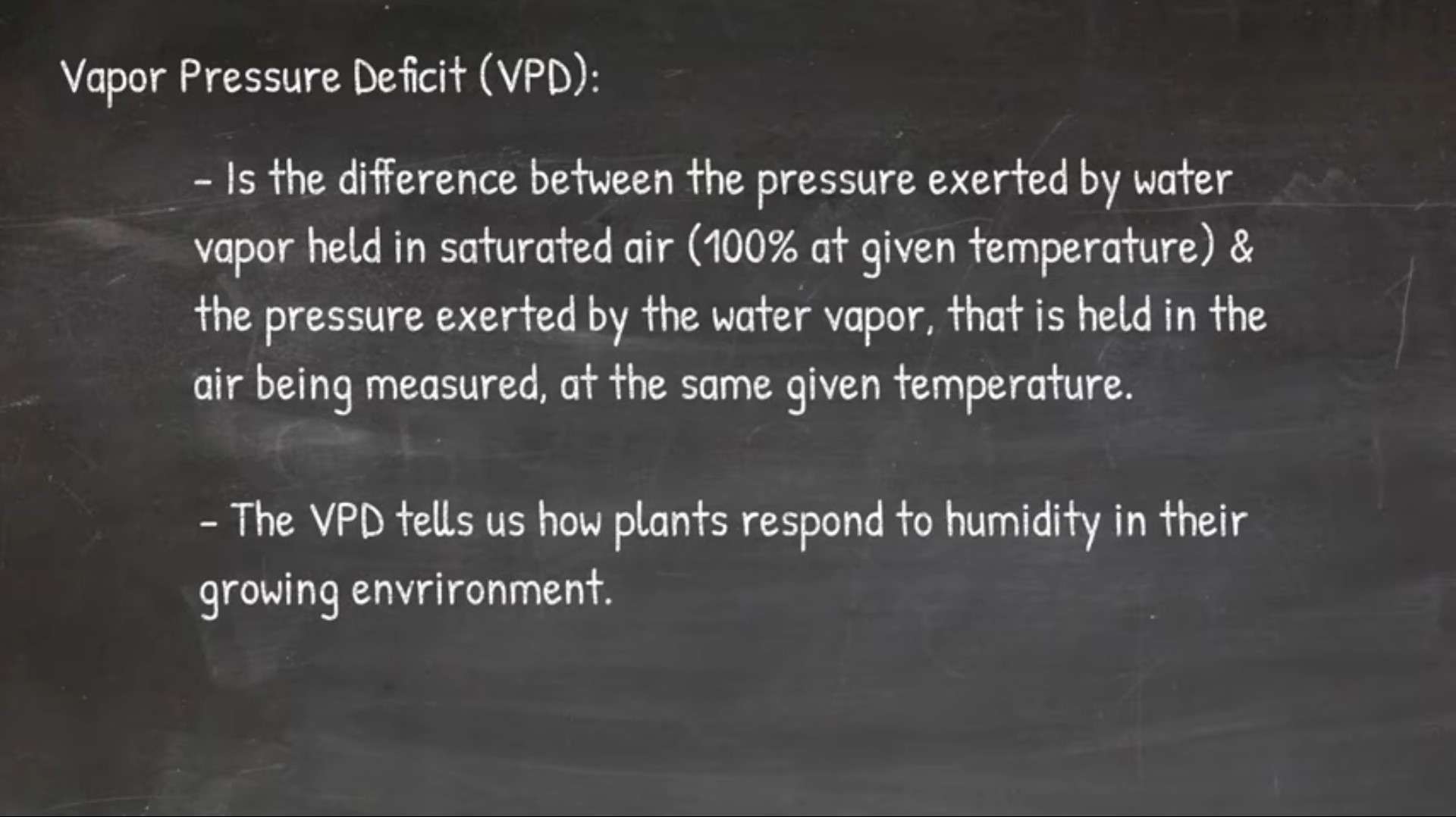 Vapor pressure is calculated using temperature and RH. There are many VPD charts online which provide this information, but we recommend using a vapor pressure calculator, such as the one provided by LetsGrow.

The optimal vapor pressure deficit range for most plants is considered to be between 0.4 kPa and 1.6 kPa. This, of course, differs among plants. Each plant has its own sweet spot for different stages of development.

As a rule of thumb, VPD should be on the higher side of the optimal range during later stages. 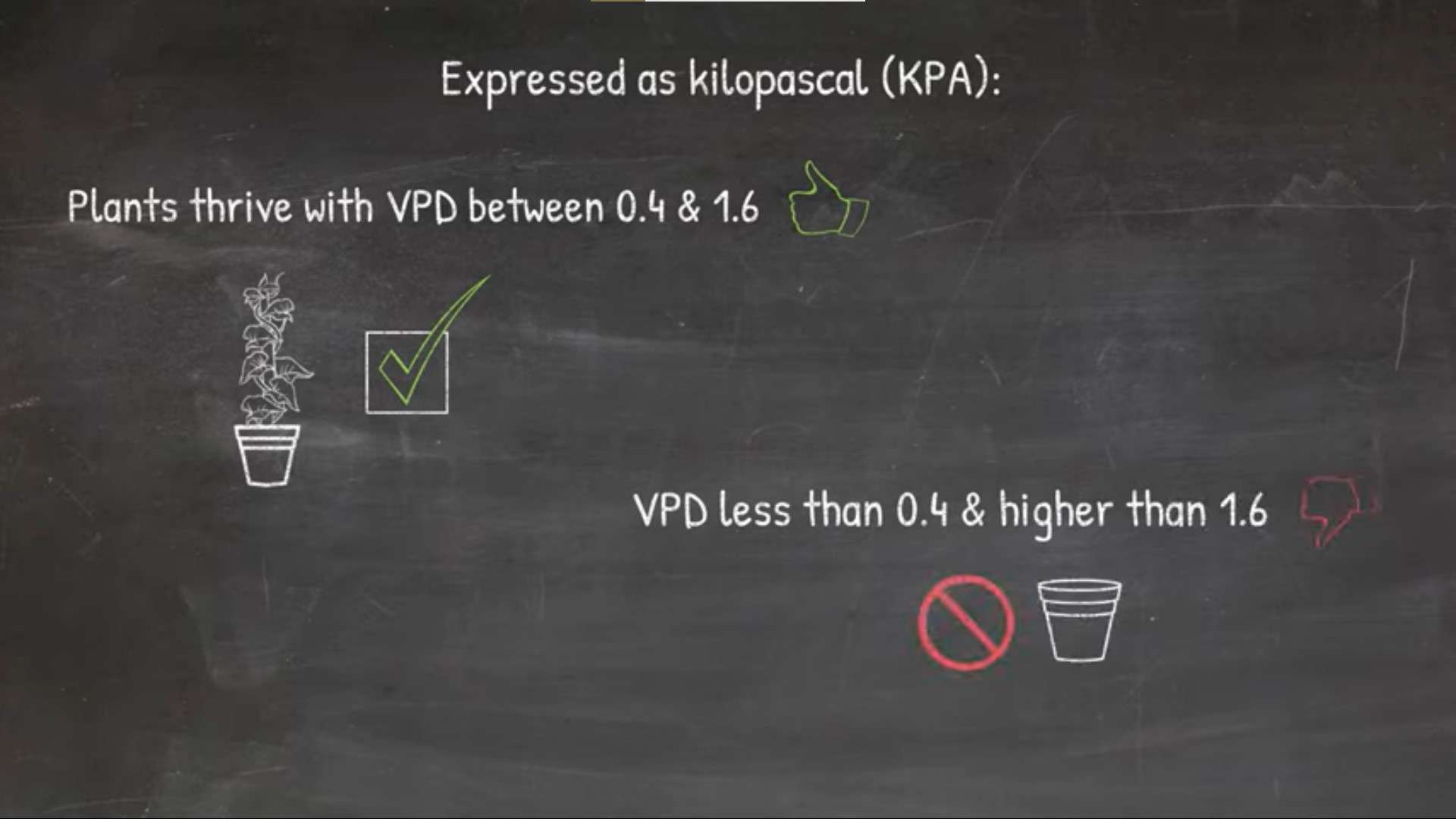 In cannabis, the ideal VPD range is narrower:

How to Manage Vapor Pressure Deficit

There are 2 ways to influence and control vapor pressure deficit:

It’s important to note that there are many things in a greenhouse that affect these 2 factors. For example, lights emit heat and will lead to higher temperature, resulting in higher vapor pressure deficit levels.

In a greenhouse environment, water constantly evaporates. This drives VPD downward, as the air gets closer to the dew point.

There are two basic methods to reduce humidity and increase VPD, in an effort to maintain an optimal range: dehumidification and air circulation.

Dehumidification is the obvious solution. Physically removing water from the air decreases humidity and increases VPD, as the air moves further away from the dew point.

A less intuitive method is air circulation. As the leaves emit water, they surround themselves with a thin layer of cool humid air – a boundary layer. Plants only experience the air with which they come into immediate contact. So, when the boundary layer remains hovering around the plant, it will experience a lower VPD than is measured in the rest of the space. This inevitably results in inconsistent measurements that may not reflect the slow metabolism rate actually experienced.

Circulating air efficiently helps in dispersing the boundary layer. In addition to increasing the vapor pressure deficit experienced by the plants, good circulation also assists in minimizing fluctuations in the greenhouse. This makes monitoring easier and more effective, while providing uniform optimal conditions, including VPD, throughout the growing space.

Want to get DryGair news and articles delivered straight to your inbox?